Have you ever put any thought into how you store your e-liquid? If you’ve been thinking about buying some vape juice in bulk – maybe because your favorite vape shop is having a great sale, for instance – it’s time to think about it. Vape juice isn’t perishable in the same way that food is, but that doesn’t mean it lasts forever. The ingredients in e-liquid are volatile, and they will slowly change over time with exposure to the environment.

So, does vape juice expire? Although there isn’t necessarily a specific date on which a bottle of e-liquid is no longer safe to use, you will definitely find that the experience of using an old bottle of vape juice differs significantly from the experience of using a new one. Reading this article, you’re going to learn how e-liquid changes over time and how you should store it in order to make it last as long as it possibly can. First, though, let’s answer the question that brought you here: How long does vape juice last?

How Long Does Vape Juice Last?

In general, you can expect a bottle of e-liquid to give you a great vaping experience for up to about one year from the date of manufacture. The fact that vape juice degrades over time, though, doesn’t necessarily mean that it’ll taste bad or that it won’t be safe to use after you’ve stored it for a year. It simply means that the e-liquid will be noticeably different from when it was new. We’ll talk about the differences in greater detail shortly.

It’s common for e-liquid makers to put “best by” dates on their products. If you have a bottle of vape juice with a date on the label, you should make a note of it and try to use the e-liquid by that date. If you happen to buy a bottle of e-liquid without a date, it’s a good idea to write the date of purchase on the bottle when you receive it. Writing the date on the bottle will help you remember to use it within a year.

When we say that a bottle of e-liquid will deliver peak vaping quality for up to a year, we’re assuming that the bottle was made under true factory-grade sanitary conditions and with pharmaceutical-quality ingredients. The vast majority of e-liquids fall into this category. They’re made under impeccably clean conditions and contain only the purest ingredients.

There are two types of e-liquid, however, that may not have quite the same shelf life as one made under factory conditions.

Most e-liquids are made under factory conditions, and most of them use concentrated natural and artificial flavors rather than botanical extracts. Therefore, vape juice generally doesn’t fall into either of the above categories and will have a long shelf life. 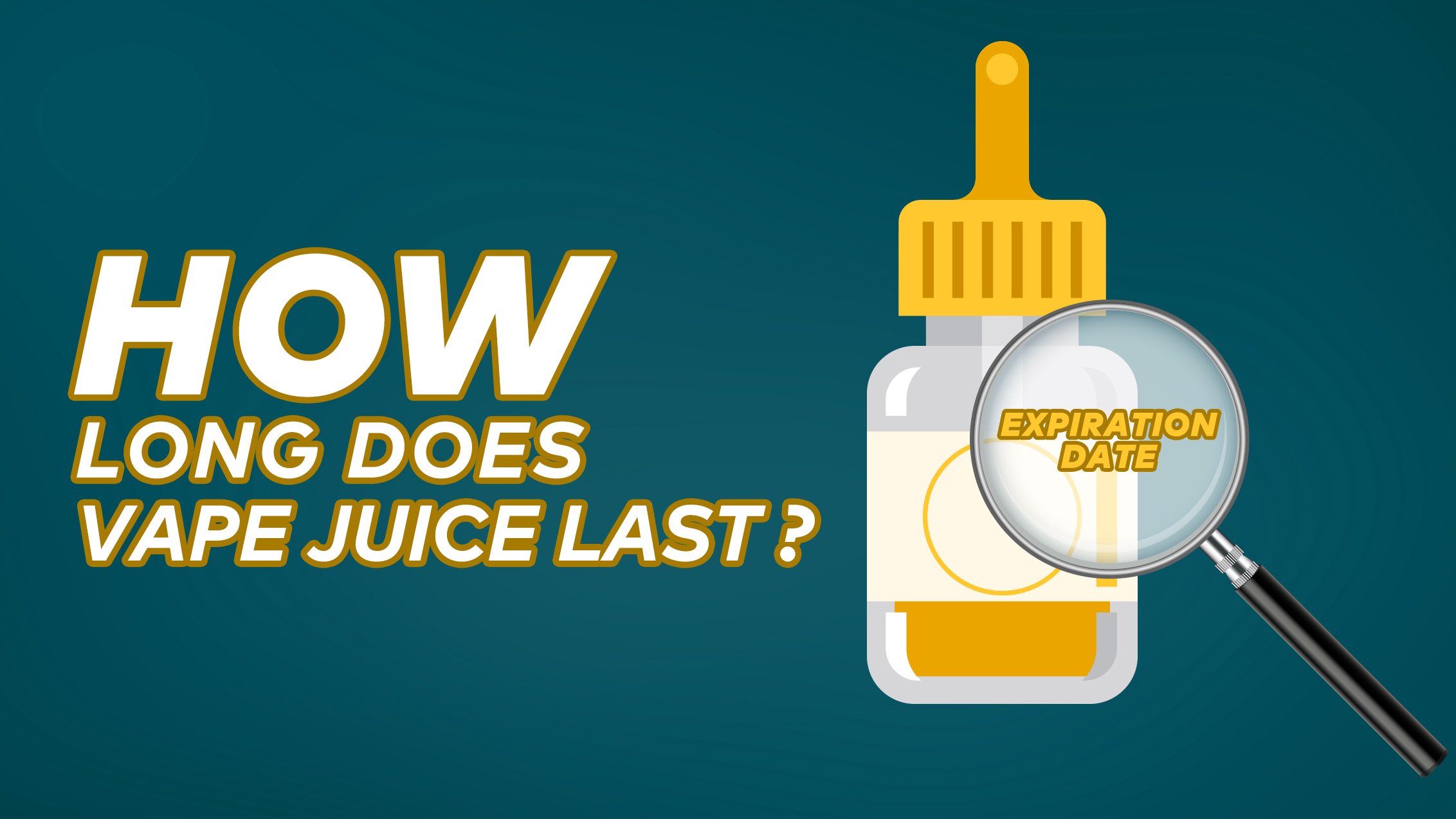 Why Is It Important to Know How Long Vape Juice Lasts?

It’s important to understand when vape juice expires because you may eventually encounter a situation in which it makes sense for you to buy e-liquid in bulk. Let’s suppose, for instance, that your favorite vape shop has a massive sale on a particular brand of e-liquid because the brand is going out of business. A major e-liquid sale can also happen when a manufacturer decides to change a product’s packaging or ingredients, making it necessary to clear out the old stock as quickly as possible.

It’s also good to know how long vape juice lasts if you’re interested in making DIY e-liquid. The most affordable way to buy e-liquid ingredients is to order them in bulk. Whether you’re storing large volumes of commercial e-liquid or your own DIY vape juice ingredients, it’s wise to have a plan to ensure that you’ll use your stock while it still tastes as good as it can.

Even if you don’t buy vape juice in bulk and generally just buy a bottle or two of e-liquid at a time, it’s still good to have an understanding of how long vape juice lasts because you want to know whether the products you’re buying are fresh or close to their expiration dates. You wouldn’t want to pay full price for a bottle of e-liquid that’s already close to a year old.

Vape juice does go bad eventually. As we mentioned above, though, it’s not as though a bottle automatically self-destructs a year after the date of manufacture. The process by which a bottle of vape juice ages and degrades is actually more gradual than that. If you’re very familiar with the way a given e-liquid flavor tastes, you may notice a difference in the e-liquid after just a few months of storage.

The reason why a manufacturer typically gives vape juice a shelf life of one year is because after that, the product will no longer meet the maker’s quality standards. At that point, the e-liquid will have degraded to the point at which it won’t be as enjoyable to use as it was when it was fresh. 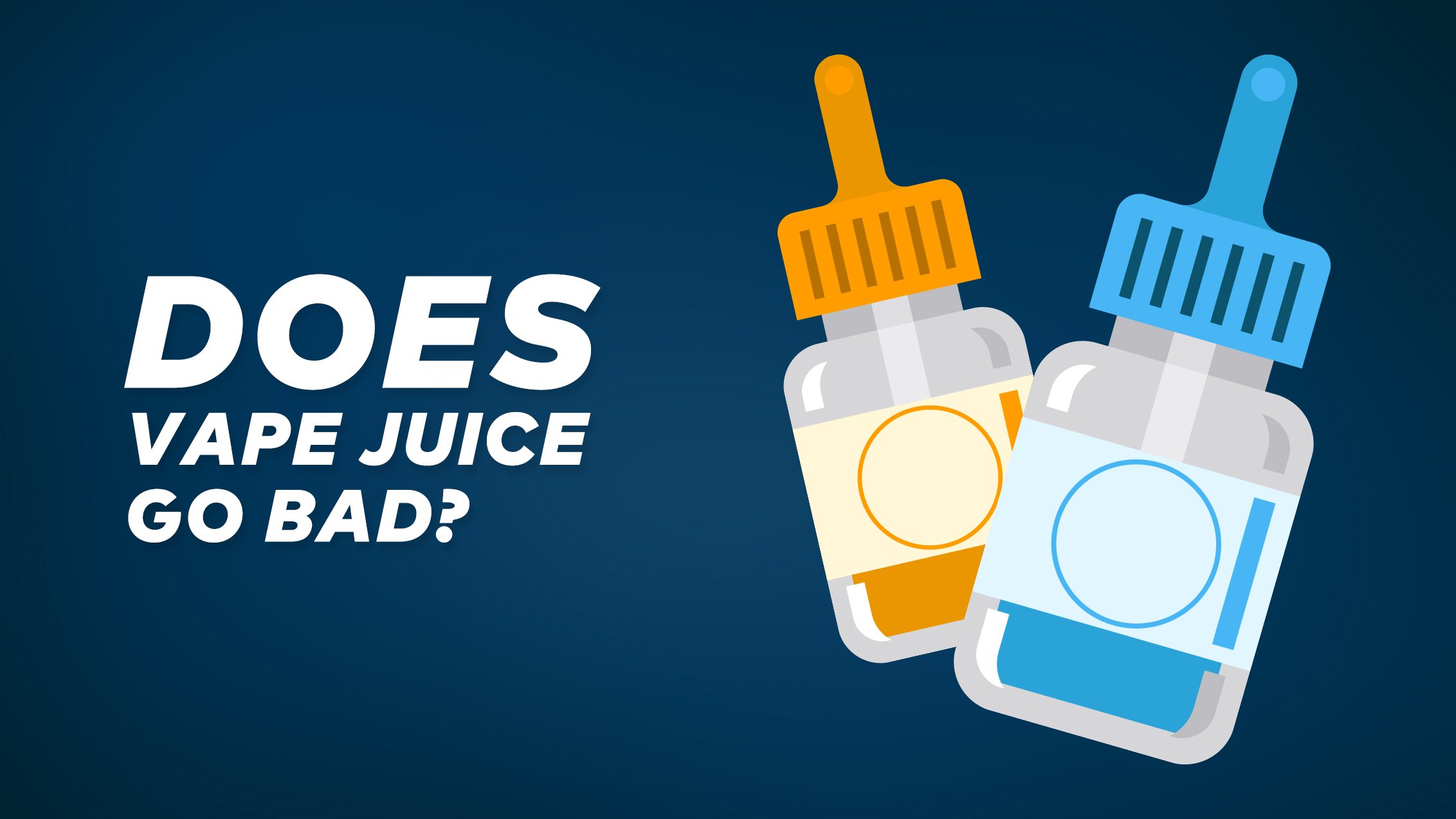 Recently at Innokin, we have been collaborating with UK-based Aquios Labs on the development of a revolutionary new range of beginner-oriented vaping products that use water-based e-liquid. Traditionally, vape juice has little to no water content because water – which is less viscous than vegetable glycerin and propylene glycol – doesn’t work well with standard vape coils and tends to lead to leaking and dry hits.

The scientists at Aquios Labs have developed a new form of e-liquid with a water content of up to 30 percent along with new coil and wick technologies for vaporizing that e-liquid, and we’re working with them to develop the vaping hardware necessary for this new form of vape juice. In addition to its many other benefits, water-based e-liquid could potentially be more stable and have a longer shelf life than traditional e-juice. 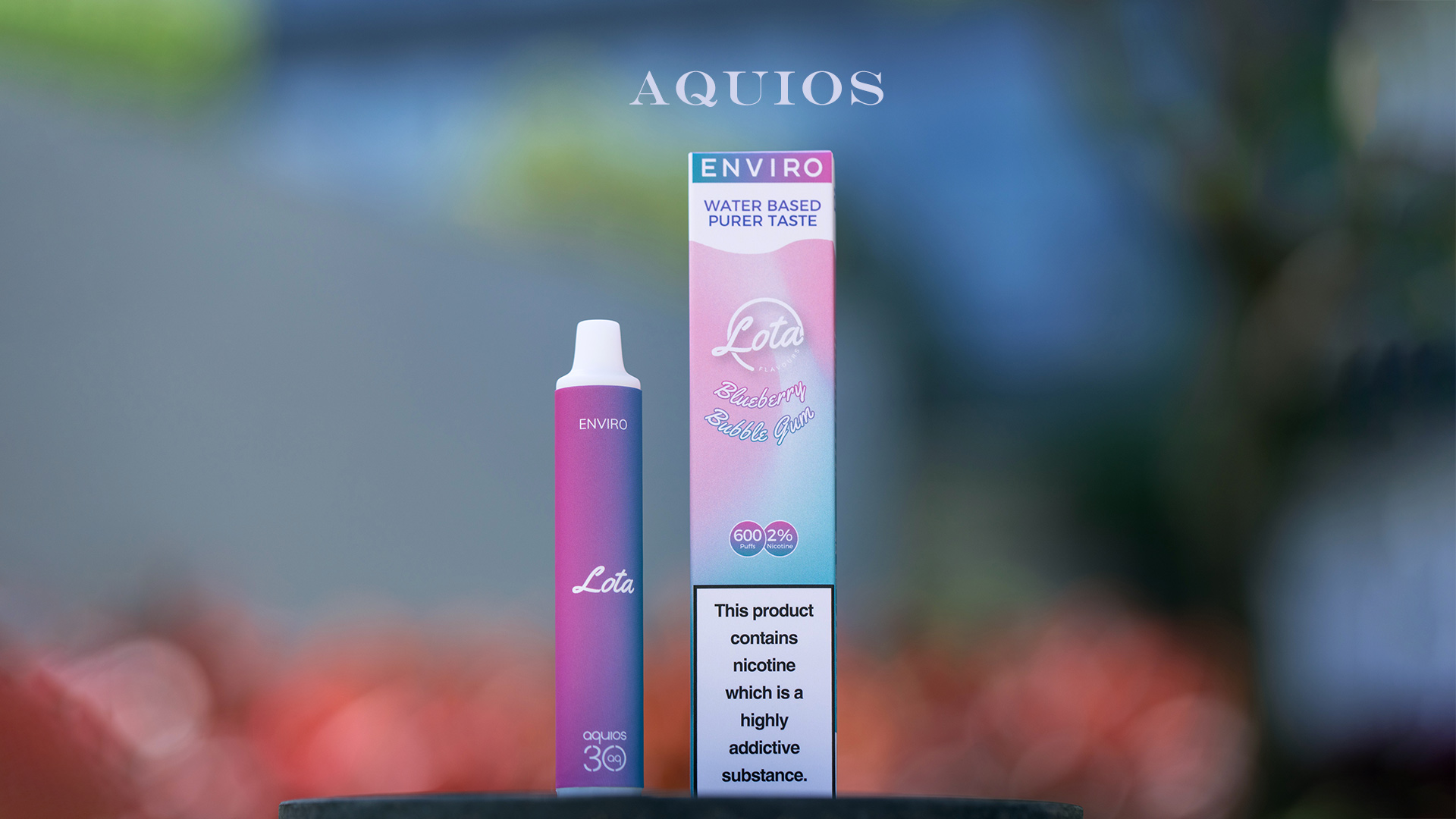 What Happens as Vape Juice Ages?

How to Store Vape Juice Properly

The primary factors that cause e-liquid to go bad are heat, light, and air. Air causes an e-liquid’s ingredients to oxidize, and heat and light further exacerbate the situation by causing those interactions to happen more rapidly. Keeping a bottle of e-liquid at its peak for as long as possible, therefore, means that you’ll need to minimize its exposure to those three things. You can do that by following two very simple steps.

As we mentioned above, some people prefer to store commercial vape juice or DIY e-liquid ingredients in the refrigerator or freezer. Keeping e-liquid very cold slows the process of degradation and may allow you to store your vape juice for a long time with little discernable change in quality. You should only consider storing your vape juice in the refrigerator or freezer, however, if there are no children in your house. 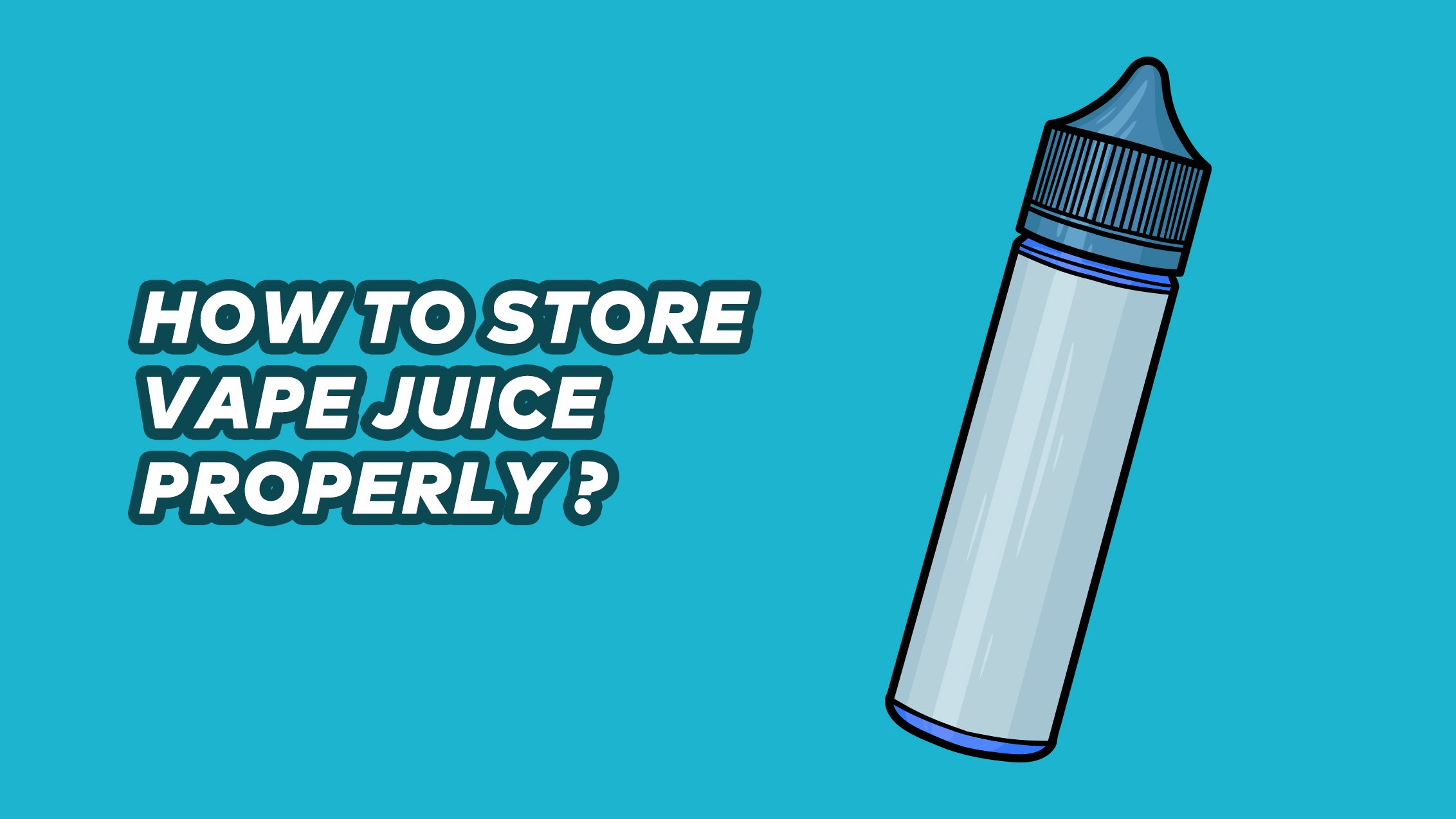 Let’s recap the main points that we’ve discussed in this article. Today, you’ve learned that vape juice does go bad after it’s been stored for a long time. E-liquid doesn’t expire, though, in the sense that it suddenly becomes unsafe to use just because the “best by” date has passed. Rather, an e-liquid simply degrades until it eventually reaches a point at which it’s no longer as enjoyable to use as it was when it was new. You can expect a bottle of vape juice to give you a good vaping experience for about one year as long as you store it properly. To enjoy the best possible shelf life, keep your vape juice away from light, heat, and air.