The vaping industry is full of specialised terminology. This can be great for categorising the vast array of products, but it tends to be confusing for new vapers. One of the most prominent examples is “sub-ohm” (often expressed as “subohm” or “subohming”). In this post, we’re going to explain what it means and why it might interest you.

What does sub-ohm mean?

To answer this, we need to understand resistance and its important role in vaping. Resistance, which is measured in Ohms (Ω), tells us how easy or difficult it is for electrical current to flow through any given component in a circuit.

Any vaping coil that measures below 1.0Ω is considered “sub-ohm” and for the most part, these coils are intended to be used at higher power levels. 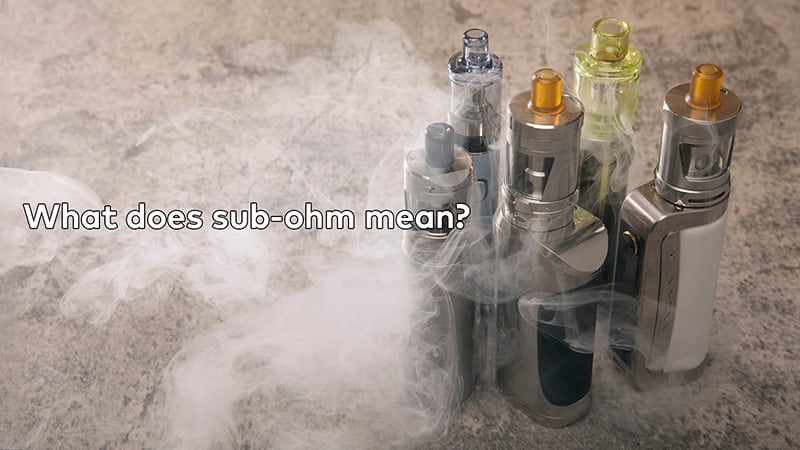 How did sub-ohm vaping start?

In the early days of vaping, it was common for coils to measure anywhere between 1.5Ω and 3.0Ω since they were designed for extremely low power output, tight airflow, and high nicotine strength e-liquids.

Before variable power devices became readily available, the only way for enthusiast vapers to change the power output of their vape was to alter the coil itself. At the time, devices either operated with a single level of voltage or directly delivered the voltage of the battery, in the case of mechanical mods.

Coils are made from a variety of resistance wires. These are materials for which the resistance is precisely known. The resistance of a coil changes depending on the material used, thickness (gauge) of the wire, the diameter of the coil and the number of wraps of the coil. Early enthusiast vapers realised that they could experiment with these variables to create low resistance coils.

The result of these early sub-ohm coils was significantly increased vapour production, improved flavour and warmth. Sub-ohm vaping started as a niche pursuit within enthusiast vaping circles, but the industry quickly took note, since it represented a chance to make vaping dramatically more satisfying for those who preferred larger clouds.

Sub-ohm has become a less relevant term in vaping

Although Sub-ohm is still a commonly used term in the vaping industry, it’s not as relevant as it once was. This is primarily due to advancements in coil design, which mean that resistance is no longer the only indicator of a coil’s capabilities or intended use.

Since 2017, mesh coils have become hugely popular. Unlike traditional coils, which are made from a length of resistance wire, mesh coils, as the name suggests, are cut from a strip of resistance mesh. Mesh coils generally have low resistance relative to their mass, which means they may be designed for low wattage vaping, despite having a sub-ohm resistance.

As a result, sub-ohm coils are no longer automatically intended for high wattages and huge clouds, so you should always check the recommended wattage range of a coil before using it.

In the modern era of vaping, it has become more useful to categorise coils by the vaping style they were designed for.

Mouth-to-lung (MTL): MTL coils are designed to replicate the experience of smoking, with a combination of low power, tight airflow and high nicotine strength e-liquids. MTL coils generally have higher resistance, but this is not always the case.

Direct-to-lung (DTL/DL): DL coils allow for high power output with substantial airflow and are designed to be used with low nicotine strength e-liquids. They result in huge clouds of vapour, with intense flavour and warmth.

Restricted-direct-to-lung (RDL): RDL coils sit in the middle of MTL and DTL, designed for moderate power, airflow and vapour production. Like DL coils, RDL coils are designed to be used with low nicotine strength e-liquids.

What are the benefits of sub-ohm vaping?

The properties of sub-ohm/DL/RDL coils allow them to produce a totally different vaping experience, which can be summarised in three key points.

Increased vapour production: Many people find larger clouds of vapour more satisfying, especially vapers who have entirely stopped smoking and want to distance themselves from that experience.

Intense flavour: The increased heat of sub-ohm coils enhances some e-liquid flavours and can be particularly beneficial for complex blends, highlighting the many layers of the flavour profile.

What are the disadvantages of sub-ohm vaping?

Although the benefits of sub-ohm vaping are important to many people, there are some disadvantages to be aware of.

Decreased battery life: Sub-ohm/DL/RDL coils require more power, so they naturally shorten the battery life of your device. For this reason, it’s best to use a device that has either a large built-in battery or a device with removable batteries if you intend to sub-ohm.

Increased e-liquid consumption: All of the big clouds produced by sub-ohm vaping are the result of e-liquid being used. In addition, sub-ohm/DL/RDL coils should only be used with low nicotine strength e-liquids. These two factors may significantly increase the volume of e-liquid that you consume over time.

Extra safety considerations: When using the higher wattages which are often required for sub-ohm/DL/RDL vaping, your device will be providing more current to the coil. This means you’ll need to be aware of the limits of your vaping device, to avoid damaging the components.

All Innokin devices feature industry-leading safety functions, however, if you choose a device that uses external batteries, please refer to our battery safety guide to ensure that your chosen battery is suitable for your style of vaping.

Which products are suitable for sub-ohm vaping?

You will need to choose a suitable atomiser and device if you want to try sub-ohm vaping. Innokin offers a wide range of sub-ohm capable devices, so you can have a great experience without compromising on build quality, ease of use or affordability.

RDL tanks: The Zenith II, Zlide, Zenith Pro and GO Z tanks are all capable of RDL sub-ohm vaping when used with an appropriate Z-coil, such as the 0.3Ω 30-40W coil.

Sub-ohm/DL/RDL mods: For high wattage sub-ohm/DL coils, you will need a mod capable of at least 50W power output. The MVP5, Kroma R, and Coolfire Z80 mods are all capable of this, with plenty of extra features for those who like to fine-tune their vape.

RDL mods: Most RDL sub-ohm coils operate between 25-40W. If that’s your intended range, devices like the Sensis, Kroma Z, Coolfire Z50 and Coolfire Z80 will be ideal. 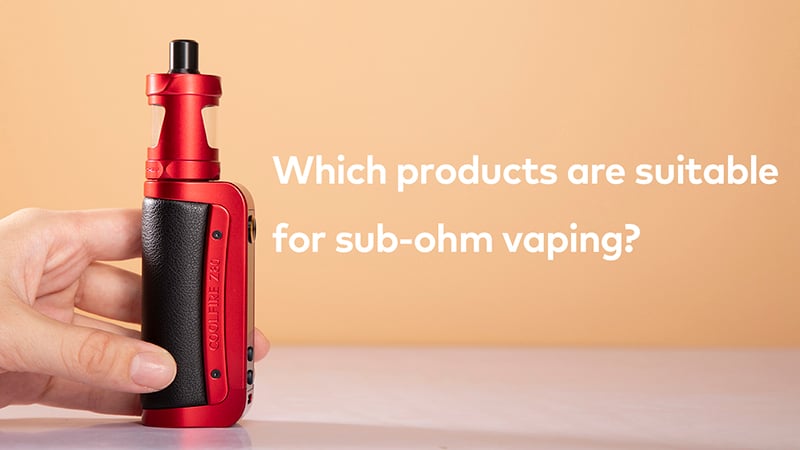 What kind of e-liquid is suitable for sub-ohm vaping?

VG/PG ratio: Sub-ohm/DL/RDL coils are generally larger and wick e-liquid more effectively. At the same time, you likely want to take advantage of the higher power levels, by using an e-liquid that is capable of producing larger clouds of vapour.

VG is a viscous liquid, which produces a very mild throat hit and lots of vapour. PG has a low viscosity, produces a more noticeable throat hit and far less vapour. For these reasons, it’s best to use an e-liquid with a higher ratio of VG when sub-ohm vaping. The industry standard is 70%/30% VG/PG and this is a good place to start.

Sub-ohm vaping has been popular for a decade now and shows no signs of slowing down. Although the term itself has been displaced by more accurate descriptors such as DL and RDL, this style of vaping remains an excellent option for transitioning smokers who want a vaping experience that is completely removed from combustible tobacco.

If you want dense clouds of vapour, with intense vapour and warmth, sub-ohm vaping might be just the thing you’re looking for.