What Is Synthetic Nicotine?

Have you seen the logo “TFN” or “TFN Nicotine” on a bottle of e-liquid recently? If you think the answer to that question is “no,” take a closer look at the vape juice you’re using right now. There’s a good chance that the e-liquid’s formula and label design have changed recently, and the changes may have been so subtle that you haven’t even noticed. The acronym “TFN” stands for “tobacco-free nicotine.” In other words, the nicotine in the e-liquid you’re using right now isn’t derived from tobacco and is actually synthesized in a laboratory – and if you’re not using synthetic nicotine already, you probably will be very soon.

Without a doubt, synthetic nicotine is the biggest e-liquid trend in 2022. By the end of the year, it’s highly likely that most of the vape juices on the market will use TFN nicotine. So, what is synthetic nicotine? Why is synthetic nicotine vape juice such a big thing in 2022, and how will it affect your vaping experience? Those are the things that we’re going to cover in this article. First, though, let’s learn more about where nicotine traditionally comes from.

Where Does Nicotine Come From?

To understand what synthetic nicotine is and why it’s significant to the vaping industry and to your personal experience as a vaper, you must first understand where the nicotine for e-liquid traditionally comes from. Until recently, tobacco was the source of nicotine for all e-liquids and all nicotine replacement products such as lozenges, gums, and patches. The specific type of nicotine used by the majority of the world’s e-liquid makers is manufactured to meet the standards of the pharmaceutical industry and is over 99 percent pure. In other words, it essentially consists of nothing but the isolated nicotine molecule and has no detectable contaminations or residual solvents.

There are many accepted methods for extracting nicotine from tobacco, although most methods involve the use of solvents such as ammonia, petroleum ether, and ethanol. Steam distillation of nicotine is also possible, but solvent-based extraction is more popular due to its lower cost. The process of extracting nicotine from tobacco with a solvent is fairly simple. A tobacco processor grinds tobacco leaves into a powder and mixes the powder with a solvent, creating a slurry. The plant material is filtered out of the mixture. The nicotine is then isolated by evaporation, with the nicotine being distilled out of the solvent or vice versa. 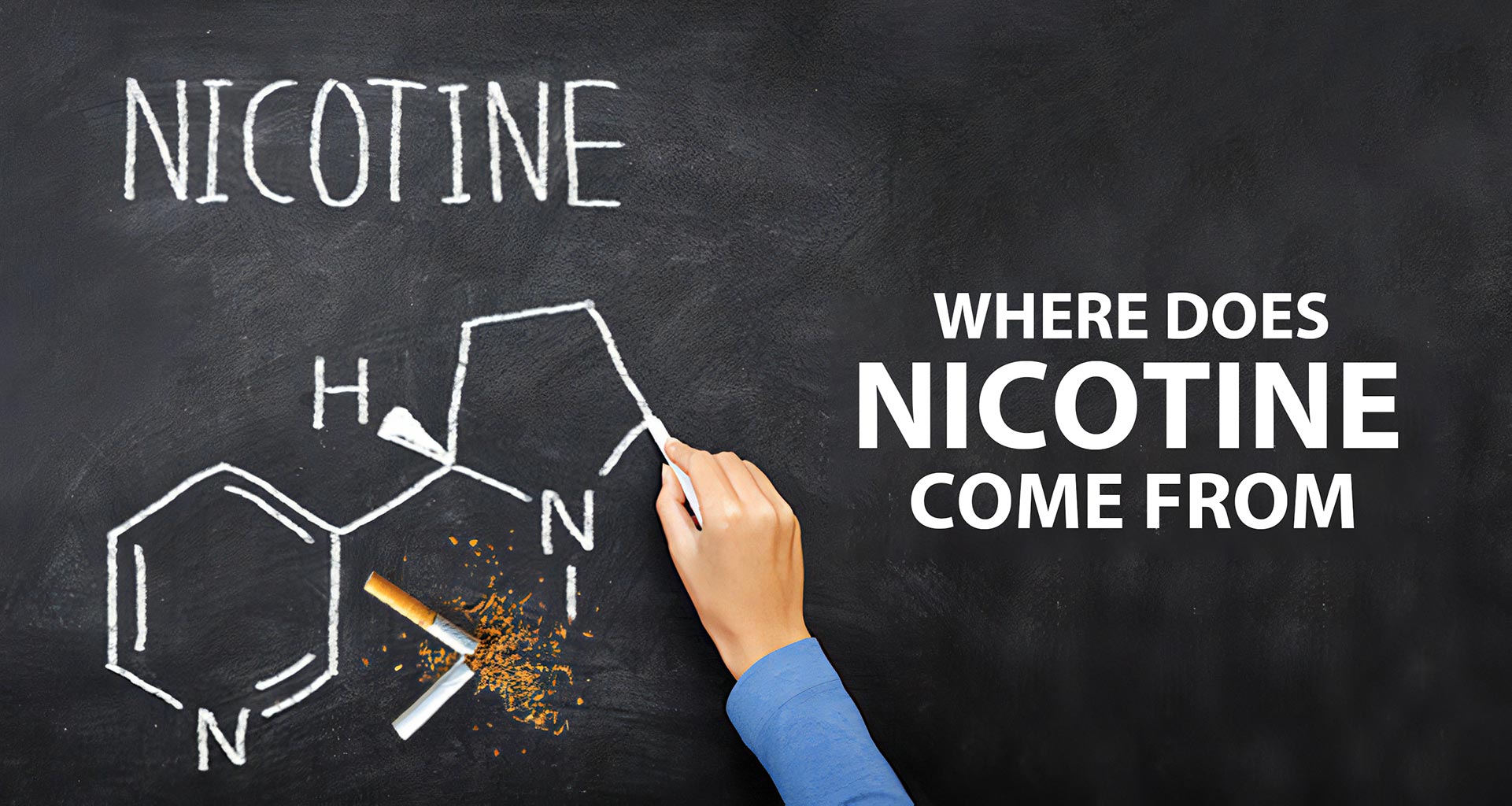 What Is Synthetic Nicotine?

While the easiest and cheapest way to obtain nicotine is by extracting it from tobacco leaves, it’s also possible to obtain the same molecule through a chemical reaction. The basic idea here involves taking a molecule that can serve as a nicotine precursor and combining the molecule with a catalyst that reacts with the precursor to form nicotine. It’s significantly more costly to synthesize nicotine in a laboratory than it is to simply extract it from tobacco leaves. There is strong demand for synthetic nicotine in the vaping industry, though, and laboratories have refined their production methods as a result. Between the increased efficiency and the demand for very high quantities, the switch to synthetic nicotine hasn’t really affected e-liquid prices for consumers.

As for how synthetic nicotine is made, every lab has its own proprietary method – and there are usually many patents involved. One method, for example, involves using ethyl nicotinate as a precursor. Ethyl nicotinate is an ester of nicotinic acid, which is also known as vitamin B3 or niacin.  It’s possible to convert ethyl nicotinate to nicotine through the use of multiple chemical reactions, and that’s just one method of creating synthetic nicotine. Since the exact method used to create the synthetic nicotine for a particular e-liquid product is transparent to the end-user, it’s likely that many different methods will continue to be used as long as the patents for those methods remain in force.

Are There Other Natural Sources of Tobacco-Free Nicotine?

At present, the term “tobacco-free nicotine” always refers to synthetic nicotine. As you may know, though, tobacco isn’t the only plant that contains nicotine. Eggplants, potatoes, and tomatoes all contain nicotine as well.

The problem with using any of those plants as sources of nicotine, however, is that their nicotine concentrations are much too low to be viable for use in commercial products. Eggplant with a weight of 100 grams contains about 0.01 milligrams of nicotine. To get a single milligram of nicotine – the nicotine content of an average cigarette – you’d need 10 kilograms of eggplant.

At this time, there’s no way to source nicotine from eggplants, potatoes or tomatoes without incurring enormous expenses and wasting huge amounts of food. In the future, though, it is possible that a company will genetically engineer one of those plants to produce higher amounts of nicotine. If that happens, synthetic nicotine will no longer be the only form of tobacco-free nicotine.

As we mentioned at the beginning of this article, there’s a reasonable chance that your favorite e-liquid brand has already switched from tobacco-derived nicotine to synthetic nicotine this year and that you didn’t even notice. That’s because true pharmaceutical-grade nicotine is already more than 99 percent pure. Synthetic nicotine is the same molecule and has similar purity to pharmaceutical-grade tobacco-derived nicotine; it’s just obtained in a different way.

The only reason why an e-liquid with synthetic nicotine might taste different to you than one with natural nicotine is that the tobacco-derived nicotine you’re currently using isn’t truly pharmaceutical grade. If a nicotine extract is poorly filtered, it could have minute tobacco remnants that give the nicotine a bitter flavor. In that case, an e-liquid maker might attempt to cover the bitter flavor of the tobacco remnants with sweeteners and strong flavors. Such an e-liquid, though, still wouldn’t taste as good as one with a purer form of nicotine. If the e-liquid that you’re currently using does happen to contain nicotine with a low purity – which is rare – you’ll probably find that synthetic nicotine tastes better.

In terms of satisfaction, people generally report that they can’t feel a difference between synthetic nicotine and tobacco-derived nicotine. A few people have commented, though, that synthetic nicotine seems less likely to cause hiccups at high strengths. If you use high-strength e-liquid and sometimes experience hiccups when you vape, you may find that hiccups occur less often – or don’t occur at all – with synthetic nicotine.

How Can I Buy Synthetic Nicotine E-Liquid?

At the time of writing, the biggest suppliers of synthetic nicotine are located in the United States and Europe. If you live in either of those regions, there’s a good chance that your favorite e-liquid makers are using synthetic nicotine already – and if they aren’t using TFN nicotine, they probably will soon. To find TFN e-liquid, all you need to do is watch the selection at your favorite online or local vape shop. If a given brand is using synthetic nicotine in its products, you’ll most likely see one of the following things on the company’s product labels:

Generally, an e-liquid brand that’s made the changeover to synthetic nicotine will want to advertise that fact to its customers. The presence of TFN nicotine is generally desirable to consumers who are happy for any opportunity to distance themselves from tobacco products to the furthest extent possible. Also, changing from tobacco-derived nicotine to synthetic nicotine represents a major investment for an e-liquid brand because doing so isn’t just a matter of reconfiguring the company’s production lines; synthetic nicotine also costs more than tobacco-derived nicotine. E-liquid companies have a strong incentive to let customers know about the investment they’ve made toward the betterment of their products.